There are many reasons that a large ERP project implementation is successful, although we narrowed them down to a handful of key points that should be followed in harmony. [5 Phases of an ERP Project]

There are likewise numerous causes for a project’s failure. Unlike the causes of success, any one of the causes of failure can be catastrophic on its own. If you perform an Internet search for ‘top causes of ERP project failure,” you’ll see many pages of lists of the “Top 10” reasons that projects indeed fail. Many of the lists will contain the same 20 or so causes—more or less, although arranged, named or described somewhat differently.

Let’s review a short list here, to give you an idea of why following the proven methodologies is so important. Let’s not forget, however, that if we perform a postmortem on 20 successful projects and 20 failed projects, they could very well be 80 to 90 percent identical. Indeed, a single item, like underfunding, or poor software fit, or insufficient testing can bury a project—and the Company that unsuccessfully implemented the project.

1. Insufficient Project Plan. If you were a construction contractor and you showed up on a commercial building construction job site and were handed a sheet of paper with a hand-drawn building and list of “items” that will be required to build it, you would be shocked. You would demand to see the reams of detailed blueprints, outlining every nuance and tiny detail of the large project. Likewise, a detailed Project Plan is absolutely necessary for successful implementation of your large ERP project. It might surprise you how often we have been brought in on a project after the Vendor has been selected, and when we ask to see the Project Plan, find it to be unrealistic, and lacking detail to the point that we must start over again and plan the project from the beginning. Companies often build a high-level plan with broad assumptions, or underestimate the amount of business change that must be involved. This often leads to failure. Despite how obvious this sounds, it remains the most common mistake companies make. To be a good Project Plan, it must identify all the requirements, and the people who are going to work on them. It needs to be at a level of detail where a knowledgeable person can visualize the work, usually in work blocks of a few days. It must contain a logical sequence of tasks, like leaving time in the schedule to fix bugs found in test cycles. Until you have a good plan, you really do not know when the project will end or how much it will cost.

2. Executives not Fully Committed to the Implementation. If the C-Level and other executives in the organization are not entirely committed to the full project from the outset, then the rank-and-file will withhold their wholehearted support, and the project will likely fail. Leadership don’t generally “come around” as they see progress, but tend to focus on speed bumps that demonstrate how the project was never a great idea.

3. Poor Software Fit. Create a highly detailed inventory of ERP system requirements before you begin shopping for software. ERP vendors are overly optimistic about their product’s fit to your needs, so be sure to involve your independent PM in this step.

4. Lack of Investment in Change Management. Even if the C-Level and executives are truly committed to the idea of the ERP implementation, the rank-and-file may feel imposed upon and overburdened during the transition. No one loves change—especially major change, which may tend to create an uncertain future for mid and lower level personnel. Daily communication and advanced preparation at all levels relieves some of these anxieties, and recruits employees to support the necessary changes.

5. Insufficient Talent Pool Resources. A major project requires sufficient internal and external resources. Internally, the Company must embrace the time commitment required from their business users, typically in the Finance, Accounting, and Human Resources departments. During critical phases of the project it’s often necessary to back up overscheduled employees by bringing in temps, to free up the users of the new system for implementation and training. For external resources, having a detailed understanding in writing with your Vendor, consultants and contractors about the specific duration, skills, and quantity of resources needed is critical.

6. Over-Customization. ERP software systems contain decades of high-level best practices and business methodologies. Nevertheless, so many organizations listen too closely to the siren’s song that the software should be modified to accommodate minute tasks inherited from “doing it our way.” Over-customization increases every other cost and risk, and renders implementation and testing more difficult. Unless the business is so unique that standard practices just can’t get the job done, customizing the software to match the legacy system should be kept to a bare minimum. Customizations always start out small, but incrementally grow to become the technical challenges that derail these projects. Few ERP implementations have zero customizations, but you should take a very firm line on justifying even the smallest ones and manage them tightly.

7. Insufficient Funding. ERP implementations are expensive, and the Company is making a substantial investment, and looking for a significant ROI. Of course, you should always be conscientious about not wasting money, but be constantly aware that the cost of an ERP failure makes the implementation investment seem like pocket change. As we always recommend, develop your Project Plan in great detail, and make your best estimate of cost; then increase that estimate by 30 percent in your budget.

8. Insufficient User Training. Many executives view the Go-Live date as the end of the project. That can be true(ish), but it requires that all of the system testing and user training be accomplished by that date. That requires extraordinary dedication to these two areas, which tend to be the first two that are diminished whenever the executives are looking at ways to cure other problems that arise during implementation. “Don’t worry, we’ll get everyone trained that week.” An ERP implementation requires trained users. Any users not trained in advance will be siphoning off resources from the implementation support team. As the available support resources diminish, the ability to resolve Go-Live problems decreases, and the implementation implodes. Today’s powerful ERP systems are being used by more personnel within a company. Beyond the Finance and Accounting departments, modern systems also cover procurement, supply chain, compliance, customer relationships, sales, distribution, and much more. If the system includes human resources or expense reporting, then essentially all employees use the system. Training hundreds or thousands of users, to the right depth, at just the right time, is no easy task. Leaving training to a small phase at the end of the project makes it very difficult for users to get the training they need to understand the system and have a positive first impression at the rollout.

9. Insufficient Data Cleansing. Data cleansing and Chart of Accounts preparation is an enormous undertaking. It can be quite a Catch-22, and requires patience and persistence. The Catch-22 is that the correct format and choices for data cannot occur without understanding how the system works, but the system won’t work without correctly formatted data. The system build and data cleansing must occur in tandem—much like performing surgery on a beating heart—or worse, like changing essential auto parts on a running motor.

10. Lack of Adequate Testing. When schedules get tight, reducing the number and depth of test cycles is one of the first areas that often gets cut. The purpose of testing a new ERP system is not to see if the software works, but to see if the system meets the business needs and produces the expected results. Without serious and repeated testing, building from a single test of every business-critical process and progressing though volume tests and a mock Go-Live requiring practice at synching up the old systems to the new, the shock and surprise of problem volume at ERP Go-Live can easily collapse the implementation effort.

Enterprise Resource Planning software consolidates all of your disparate systems, and manages all of your day-to-day business activities in a centralized system. 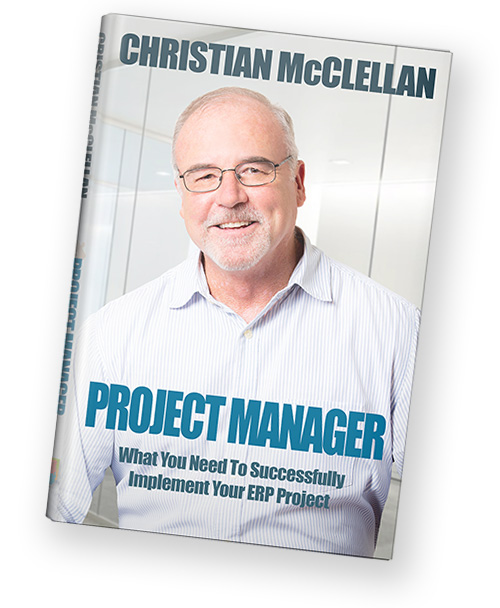 Christian McClellan has been an international top tier Project Manager for over two decades, and is intimately familiar with all of the appropriate methodologies for implementing sweeping changes in a large organization.

Christian shares his considerable expertise in his book, PROJECT MANAGER: What You Need To Successfully Implement Your ERP Project.

Get answers on our FAQ page.

You should select an independent consulting Project Manager before you make any other decisions about your ERP project. [learn more]